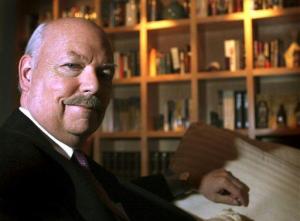 Investigative Journalist James Bamford knows a thing or two more than some believe he should about the National Security Agency. Across his more than three-decade long career digging muck out of exactly those places U.S. government intelligence agencies preferred he wouldn’t tread, he’s published five books and over eighty press reports. At times, this made for some tense confrontations with intelligence officials from an organization once so secret even few members of Congress knew of its existence.

For the last several years public focus on the NSA has been on Bush and Obama era reports of illicit domestic spying. From allegations of warrantless wiretapping reported by James Risen in 2005 to secret documents released to journalists at The Guardian by Edward Snowden a year ago. And smack in the middle, Bamford’s 2012 revelation of the existence of a huge, exabyte-capable data storage facility then under construction in Bluffdale, Utah.

Given all this attention on recent events, it might come as a surprise that almost forty years ago Senator Frank Church convened a congressional committee to investigate reports of unlawful activities by U.S. intelligence agencies, including illegal domestic wiretapping by the NSA. At the time, Church brought an oversight magnifying glass over what was then half-jokingly referred to as “No Such Agency.” And then, like today, James Bamford was in the thick of it, with a Snowden-like cloak-and-dagger game of spy-vs-journalist. It all began by giving testimony before the Church Committee. Writing yesterday in The Intercept, Bamford tells his firsthand historical account of what led him to testify as a direct witness to NSA’s wiretapping of domestic communications decades ago and then details the events that led to the publication of his first book The Puzzle Palace back in 1982.Read on for more.

…during the summer of 1975, as reports began leaking out from the Church Committee, I was surprised to learn that the NSA was claiming that it had shut down all of its questionable operations a year and a half earlier. Surprised because I knew the eavesdropping on Americans had continued at least into the prior fall, and may have still been going on. After thinking for a day or so about the potential consequences of blowing the whistle on the NSA—I was still in the Naval Reserve, still attending drills one weekend a month, and still sworn to secrecy with an active NSA clearance—I nevertheless decided to call the Church Committee.

But he didn’t stop at the witness stand. Afterward, he continued researching the matter for a book. And the further he dug, the more waves he made. Until someone slipped him a then recently declassified copy of a 1976 Justice Department memo [PDF] detailing a criminal investigation into illicit domestic spying by the NSA. But when agency officials discovered he had that document they took extraordinary measures attempting to get it back. They threatened to prosecute under the 1917 Espionage Act and retroactively reclassified the memo to squelch its contents.

Fearing someone might break into his home and steal the manuscript, Bamford arranged to transport and secure a copy outside of U.S. jurisdiction with a colleague at the Sunday Times of London. It was only upon the 1982 publication ofPuzzle Palace that the agency dropped their pursuit of Bamford and his document as a lost cause. That’s at least one stark difference between then and today when it comes to whistleblowers — back then, they merely threatened espionage charges.

Yogi Berra famously once said, “It’s like Deja Vu all over again.” And though the Yankees’ star wasn’t speaking of illicit domestic wiretaps by the national security state, given a comparison of recent revelations to those detailed by Bamford decades earlier the quote certainly fits. In telling his story of how he published details about the last NSA Merry-Go-Round with warrantless wiretapping, Bamford shows us that our recent troubles of lawless surveillance aren’t so unique. It’s deja-vu all over again. But if deja vu is like a waking dream, this seems more a recurring nightmare for a body-politic lured to snoring slumber by a siren-song of political passivity.

That old Justice Department memo isn’t likely to wake the public from their slumber. But within its pages is a stark warning we all should have heeded. As Bamford notes in that Intercept story, the report’s conclusion that NSA lawlessness stems straight from the birth of the agency suggests a constitutional conflict systemic and intentional.

…the NSA’s top-secret “charter” issued by the Executive Branch, exempts the agency from legal restraints placed on the rest of the government. “Orders, directives, policies, or recommendations of any authority of the Executive branch relating to the collection … of intelligence,” the charter reads, “shall not be applicable to Communications Intelligence activities, unless specifically so stated.” This so-called “birth certificate,” the Justice Department report concluded, meant the NSA did not have to follow any restrictions placed on electronic surveillance “unless it was expressly directed to do so.” In short, the report asked, how can you prosecute an agency that is above the law?

This story originally appeared on Slashdot.