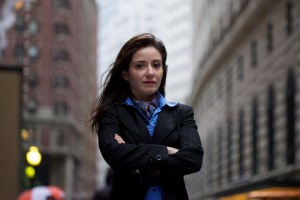 Carmen Segarra used to work as a regulator for the New York Federal Reserve Bank, one of twelve regional banks that make up the US central banking system. In her capacity as regulator, Ms. Segarra was assigned to a team overseeing investment banking giant Goldman Sachs. There, while investigating a case of Goldman having advisied a client about a buyout offer by another company in which the firm held significant investment holdings, she determined that Goldman didn’t even have a conflict of interest policy. Her supervisor initially backed the investigation, until it became clear she meant to file a written report detailing her findings of fact. Then they abruptly fired her.

And all this would have been another unfortunate case of ‘she-said / institution-said’ ineffective whistleblowing were it not for the fact that Ms. Segarra saw what was coming and had bought a keychain audio recorder. With it, she collected 46 hours of internal discussion and meetings, including statements by Goldman Sachs principles admitting the firm didn’t have a conflict of interest policy and that the deal under investigation had been “shady.” Additionally, she collected reams of documents and testimony. She thought her case iron clad.

However, when it came time to reveal her findings in full to superiors, though initially supportive of the investigation, her boss quickly shifted gears and worked to squelch the report. This culminated in a recorded meeting where her boss made clear his supervisors at the Fed insisted she downplay those findings. Then, a week later, before she could formally file the report, they fired her.

While bits of the story have been out in print for about a year, the radio show This American Life just published actual excerpts from those audio recordings. They make for harrowing listening. As the producer says in the introduction, her recordings show: “Repeated examples of pervasive regulatory capture by the industry regulators are meant to oversee.”

In other words, whereas before we could all surmise just how bad banking regulation must be, what with the Financial Crisis having nearly tanked the world economy and all, with this audio we can hear first hand and in minute detail what it’s like for an honest regulator to try to do the job properly: You get fired. Quickly. Then your embarrassing work is buried and reputation smeared. And if she’d just kept her mouth shut, she coulda gotten rich! This, at the very heart of the global financial system.

Is it any wonder why the public has lost faith in our political and economic institutions?