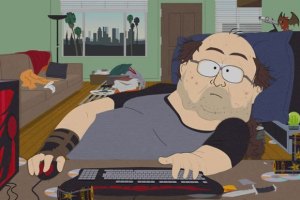 She’s Purdy. I Should Threaten to Kill Her.

For those with lives too busy to bother following mini-scandals in the gaming industry, Chris Plante of Polygon recaps a terrible, horrible, no good, very bad week for the community as a whole. Little ‘ol unknown me will list the events, as did he, because they’re so outrageous they warrant repeating:

1. Old-sk00l gamers, opposed to structural shifts in the industry, used Youtube, Reddit, twitter, 4chan, and an assortment of channels to distribute defamatory and private correspondence about a sexual matter between one purple-haired female indie-developer and her chagrined dirty-laundry-tell-all ex-boyfriend. The ex claimed that of several she’d slept with while they were together, one is a gaming journalist. This got a contingent of the gamer community up in arms over supposed systemic corruption within gaming journalism. Ostensibly because that journalist might have posted positive reviews of her freely available game in a sex-for reviews quid-pro-quo, and thereby promoted not just the game but her feminist values as well.

2. A friend of this purple-haired indie-game-dev chick, Phil Fish, an indie-dev himself, tweeted a note of support for her. In response, someone hacked his twitter account and web site. He wasn’t pleased about that.

3. In a separate matter, feminist vlogger Anita Sarkeesian released another of her videos on Tropes Versus Women in Videogames on Youtube. There’s been a history of vehement opposition to her work, with death and rape threats, harassment, and general trolling. And this week, it happened again. 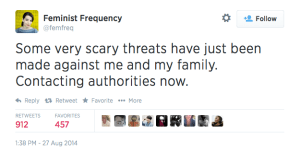 Someone messaged her with death threats against her and her family, including her home address to make it clear they were serious. She and her family left home in fear for their lives. The story’s all over the news. Real classy.

4. It seems old-Sk00l kids don’t like Sony either. A bomb threat diverted a flight carrying Sony Online Entertainment President John Smedley. And someone engaged in a denial of service attack that shut down the Sony Playstation Network.

5. And yesterday, someone called the police and made a false report about game developer Chris Kootra. As a result, a SWAT team invaded his company offices with guns drawn. One false move and he could have been killed.

swatted’. Authorities call it a felony.

After Plante finished summarizing these sorry events he concluded:

This week, it should be clear to this community that games are at a cultural turning point. No longer are games designed, marketed and sold to a niche group of young men. … More games are being created by more people for more people than ever before.

Which is right. But I wish Plante had also focused on the business side of this cultural transition in gaming. It’s more than just a cause of social righteousness. Because, as the PBS NewsHour reported, women now outnumber teenage boys as a market demographic buying games.

Adolescent boys are widely considered to be one of, if not the most, sought-after demographic by game development studios, but the uptick of female gamers could be a signal of changes to come. Mobile ad firm Flurry Analytics found that on on the whole, women presented a much larger value proposition to game developers in terms of revenue and brand engagement. [link in original]

That’s a fact seemingly ignored by just about everyone, journalists and both pro and anti feminist gaming activists alike. Instead, the focus is on media personalities.

Anita Sarkeesian versus Thunderf00t. Or, InternetAristocrat versus [unnamed female indie-dev-chick with purple hair]. This personalized conflict mobilizes the masses on each side, drawing viewership, building audience, fanning comment flame wars. Anti-social-justice-warriors claim Sarkeesian incites trolls to attack her and thus build a sympathetic audience, all while disseminating salacious and sometimes defamatory material about their opponents to do just the same. Both sides get more views as the controversy escalates. Wash, rinse, repeat.

But lately, the anti-social-justice warriors have used the scandal with this purple-haired-indie-dev chick, and revelations about her private life, to elevate the matter to one of supposed journalistic ethics. Taking reports from the ex-BF detailing her relationship with this other journalist and concluding that an alleged sex-for-game-review quid-pro-quo had occurred. Thus, to them, here was proof of widespread ‘journalistic corruption’ in the gaming press.

Are you fucking kidding me?

You needed to reveal details of some purple-haired-chick’s private sex life to make the case that for-profit media companies print public relations and help their advertising customers maximize sales? You conclude ‘journalistic corruption’ because one journalist might have released a bogus positive review of a game that’s given away for free?

And this is your case for corrupt journalism?

Rob Simple’s blog presents a well written argument for that position (I like Rob’s blog). He also includes a hoard of down the rabbit-hole crazy-facts-that-don’t-matter about that female developer whom I shan’t name, so go there for the digs. But, getting to the core issue of this so-called journalistic ethics debate, and what to do to save gaming journalism, he concludes:

Honestly, I don’t think it needs saving. It needs [to be] euthanised.

I’m sorry, euthanizing the gaming press is your solution? Never mind that it’s no solution, just how do you implement it? Are you going to take out the entire gaming press with a carefully aimed BFG shot? I’m sure the industry is – ahem – quaking in their boots.

Look, gaming journalism isn’t a morass of industry collusion because some unknown green-haired indie-game-dev-chick may have gotten one or more unfair positive reviews for a free game. As Totalbiscuit eloquently points out, the real issue is a gaming public being repeatedly snookered by misleading public relations campaigns for shitty commercial products. With supposedly objective reviewers trading inside access to promote a hype machine about an ever present unbearably desirable new. And those gaming media outlets thus raking in ad revenue cash in the process. All that to hawk $60 pieces of unfinished garbage. And you facilitate all this. Feminists gaming press is a side issue.

There’s an argument I’ll buy. Totalbiscuit, I salute you.

You want to talk real corruption in journalism? The field is a mess everywhere these days. Some examples that dwarf little things like video games: Stephen Glass, Jayson Blair, Margaret Wente, Jonah Lehrer, Gerald Posner, and more – all disgraced for publishing false quotes and/or printing plagiarism. A Poyntr study reported that in 2012 alone, a total of thirty-one known instances of reporters fabricating quotes or plagiarizing sources had been revealed.

Here’s some more: In the lead up to the Iraq War, Judith Miller, of The New York Times, wrote numerous hard news articles using anonymous quotes by Bush administration officials that turned out to be false. The Times’ editors squelched James Risen’s report on Warrantless Wiretapping at the request of Bush Administration officials during the ’04 election cycle, thus impacting the election itself. Scott Shane’s NY Times reports in 2010-11 that cited unnamed CIA sources who smeared the London Bureau of Investigative Reporting’s work documenting Afghan civilian casualties, falsely calling it a Pakistani Intelligence operation. And let’s not forget Dan Rather’s report that used a falsified document purporting to supposedly prove George Bush’s draft dodging. Or Lara Logan’s CBS News 60 Minutes flawed report on Benghazi citing an anonymous source that turned out to have lied about his background and uttered false claims on camera.

I could go on and on with more examples, but those were stories of national and international import. More than just disseminating false public relations and corporate propaganda to sell newly released or pre-release commercial games, but shit nations go to war over.

OK, so agreed – ethics in journalism is seriously fucked up. But then so is this idiotic example of a random purple-haired-chick used as some grand cause célèbre for ferreting out ‘systemic journalistic corruption.’

You gotta be fucking kidding me.

Totalbiscuit’s discussion of big gaming companies wresting bogus reviews for pre-orders and shitty games seems a more viable target. That is, if you want to hit upon the core of bad journalistic and commercial media practices. Because no for-profit media company would put their reputation on the line and disseminate false reviews of certain free games merely to promote a social agenda. That’s nuts. No, they’d want more. A big advertising contract. Insider access for a juicy story sure to draw audience. SHOW ME THE MONEY.

These are the things that move media business. So I’ll put it in stark terms:

No mere social movement alone has EVER shifted the media landscape in a multi-billion dollar industry.

You anti-social-justice-activists plain have it wrong. Journalists aren’t colluding with game developers to force social justice themes on buyers of games. No business has ever cared about social justice. They collude with big players to sell shitty products and attract advertising revenue.

Got that? It’s about MONEY.

As told in that PBS article on women gamers having overtaken teenage boys as buyers, this tells the tale of a demographic shift affecting product and press. So does Anita Sarkeesian and the +200,000 followers on her Youtube channel. These are leading indicators of a potential lucrative market the gaming industry wants to tap. Let’s be honest, these companies are more interested in exploiting new markets than furthering the cause of the exploitation of women. All this hoopla about chick-games is an industry tailoring new product to suit new buyers. Not some great awakening of social conscience by a once misogynistic now reformed industry.

They do it because it will make them richer.

And all ya’ll old-Sk00l gamers are a tapped out and maximized market. How much more growth opportunity do you present?

Ya’ll won’t change this market transformation by loudly complaining on Youtube, Reddit, /v/ and elsewhere. Or engaging in illegal guerrilla tactics like threatening the life of a feminist culture critic, smearing a purple-haired indie-dev-chick by disseminating details of her private life, hacking a corporate gaming network and making bomb threats at an airport to piss off one of their executives, and certainly not by calling in a SWAT team on some random game developer. That shit will simply destroy your credibility and attract notice of very pissed off authorities with real guns and a long memory. 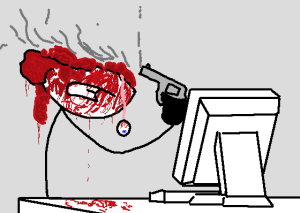 NOTE: This entry was originally posted at WordPress.com.